Brave New Medicine: How an Enzyme Created with Synthetic DNA May Enable the First Treatment for Celiac Disease

Justin Siegel is an assistant professor of chemistry, biochemistry and molecular medicine at UC Davis. He is also one of the co-founders of PvP Biologics, a university spinoff that is seeking U.S. Food and Drug Administration approval for a therapeutic enzyme for the treatment of celiac disease, an autoimmune disorder triggered by ingesting gluten. (UC Davis/Karin Higgins)

The way Justin Siegel describes it, ordering synthetic DNA online is almost as easy as ordering a pair of shoes from Zappos. âYou just type it in â or if the protein has been sequenced at one point, we can copy and paste â order it, and it shows up five days later.â Siegel is an assistant professor of chemistry, biochemistry and molecularÂ medicine at UC Davis. He is also one of the co-founders of PvP Biologics, a university spinoff that is seeking U.S. Food and Drug Administration approval for a therapeutic enzyme for the treatment of celiac disease, an autoimmune disorder triggered by ingesting gluten. Enzymes that can potentially digest gluten are not a new idea for treating celiac disease. There are food supplements you can buy in health food stores that claim to digest gluten. There have also been credible therapeutic versions, including an oral treatment that combined two enzymes, SC PEP and EP-B2, created in Chaitan Khoslaâs lab at Stanford University. But even though an enzyme might demonstrate an ability to break down gluten in a test tube, the human digestive system is much more complex. Siegel points out that people donât just eat gluten; they eat a meal. In addition to a bun, they might also eat a hamburger with cheese and some fries and maybe drink a beer or a big chocolate milkshake. All in one sitting. It is extremely difficult for an enzyme supplement to be able to zero in on just the gluten mixed up in a complicated slurry of food. And an additional complication is that the gluten needs to be digested in the stomach before it reaches the small intestines where it triggers an immune reaction in people with celiac disease. âThe immunogenic portion of gluten is just a tiny piece of the protein. Itâs this little peptide,â explained Siegel. âThe needle-in-a-haystack analogy is perfect because this peptide looks just subtly different from all the other proteins present in a meal, but that subtle difference is what triggers a whole immune response for people with celiac disease.â

During the summer of 2011, Siegel and Ingrid Swanson Pultz, who were both pursuing Ph.D.s at the University of Washington, were advisors for an undergraduate team that would be competing at the International Genetically Engineered Machine (iGEM) competition that fall. Held every year in Boston, iGEM is essentially the Olympics of synthetic biology. Teams of undergraduates attend from across the world. They are expected to âsolve real-world challengesÂ by buildingÂ genetically engineered biological systemsÂ with standard, interchangeable parts.â The undergraduates had friends who couldnât eat wheat â meaning, among other things, they had to forgo college rituals like beer and pizza â so the real-world problem the students were interested in solving was gluten intolerance. The team researched existing literature and found a naturally occurring enzyme called kumamolisin that could survive acidity, such as that found in the stomach, and also target a specific repeating amino acid âmotifâ for destruction. The iGEM team set out to engineer the enzyme to switch this target motif to the one thought to be the trigger for gluten intolerance. To construct possible variations of their enzyme, the team used an online multiuser video game called Foldit, which is based on a software program called Rosetta created in the lab of David Baker at the University of Washington.

Justin Siegel. an assistant professor of chemistry, biochemistry and molecular medicine at UC Davis, is also one of the co-founders of PvP Biologics, a university spinoff that is seeking U.S. Food and Drug Administration approval for a therapeutic enzyme for the treatment of celiac disease. (UC Davis/Karin Higgins)

âFoldit is like 3-D Tetris for folding proteins,â explained Siegel. âFireworks go off, energy changes. Red things show up when something is bad, blue stuff shows up when itâs good.â Folditâs intuitive visual interface allows players to rapidly interact and model proteins without needing to learn about complex molecular interactions through years of study. âUsers focus on manipulating molecular interactions while gaining an intuition of how these molecular interactions are working,â said Siegel. Using Foldit, the students created roughly 100 variations of kumamolisin. They inserted synthetic DNA of those variations into a harmless strain of E. coli (some E. coli cause illness but most are harmless) and then tested the resulting proteins made in the microbes for efficacy in breaking down the peptide motif associated with immunogenic gluten. They then took the top performers â variations that were the most effective at breaking down gluten â and combined those traits as well. The team ended up with an enzyme that was significantly better, in gastric conditions, at breaking down gluten than SC PEP, which at that time had been licensed to Alvine Pharmaceuticals for consideration as an oral therapy for celiac disease. And the students managed to do all of this in just one summer. Perhaps not surprisingly, the University of Washington team walked away with the grand prize. Synthetic DNA melds engineering with biology The enzyme they created, now named KumaMax, would not exist without synthetic biology. Scientific advances in genomics have increased exponentially in recent years. Genetic sequencing allows researchers to read DNA. Genetic engineering techniques allow researchers to move genes from one organism to another. CRISPR/CAS9 is letting researchers edit DNA within an organism. And with the ability to create and utilize synthetic DNA, a piece of genetic code can be built to specification. With synthetic DNA, researchers are sometimes trying to replicate a piece of DNA that already exists â something that occurs in nature â but often the DNA is a fabrication, like what the University of Washington students created by making different iterations â mutations â of the original kumamolisin enzyme. One way to think about synthetic biology is that itâs a discipline that melds engineering (what a piece of DNA can do) with biology (what an organism can produce). Biological cells become almost like little factories that can produce a variety of products. And although synthetic biology has been around for a while, the range of applications for it are growing. Pieces of DNA are being inserted into microbes to do everything from growing collagen that can be used for an artificial leather, to producing spider silk from yeast, to encoding and storing digital information that could one day replace computer hard drives. Getting DNA wasnât always this easy. âBefore synthetic DNA, you had to go out into nature and clone genes directly from the naturally occurring organism, and then hope the way the organism genetically encoded the protein of interest would be functional in easy-to-use model organisms,â said Siegel. âIt had low success rates, and it was very difficult. It would commonly be an entire Ph.D. project to clone one gene and characterize it.â Working with synthetic DNA is much easier. When it arrives at Siegelâs lab in the Genome and Biomedical Sciences Facility at UC Davis, the synthetic DNA is in a clear test tube, no refrigeration needed. Because he orders it âsequenced verified,â he trusts that the genetic code is exactly what he typed in. The next step is to get the DNA into an organism. Siegel generally uses E. coli. âWe know how to work with it, it grows fast and itâs easy to use.â Siegel explains that there are several ways to get E. coli to take up the external DNA. âWe use electrical shocks or we use temperature fluctuations. Then, once the E. coli take up that external DNA weâve encoded, it starts producing the proteins we are researching.â And although the technique of growing an artificially created protein in E. coli to create a new therapeutic for celiac disease may seem fantastical, synthetic biology is likely to dramatically change how drugs are created in the future. And KumaMax may end up being the first viable treatment for celiac disease, which can take a heavy toll on the body. Gluten-free diet is only treatment for celiac disease Hereâs what happens when people with celiac disease eat gluten: Their immune system goes on the attack. Their body treats gluten, a protein found in wheat, barley and rye, like itâs some sort of hostile invader, and the resulting inflammatory response damages the lining of the small intestine. Sooraj Tejaswi, M.D., an associate clinical professor in UC Davisâ Division of Gastroenterology and Hepatology, uses a carpet analogy to describe the result of this immune system assault. âUnder a microscope, the villi in the small intestines, which help with nutrient absorption, should look like a shag carpet. But in people with celiac disease, the villi get destroyed faster than they can regenerate, so you end up with pretty flat mucosa,â essentially more like some nubby Berber carpet, âthat can no longer absorb nutrients,â said Tejaswi.

Sooraj Tejaswi, M.D., an associate clinical professor in UC Davisâ Division of Gastroenterology and Hepatology, treats patients with celiac disease. âItâs a shock for patients when they come to clinic and we tell them âyou have to have to avoid gluten.â Itâs like you are handing them a harsh sentence for life,â said Tejaswi. (UC Davis/Lisa Howard)

Being able to break down ingested gluten before it has a chance to cause a reaction could be a true breakthrough for the disease. But for the enzyme created at the University of Washington to be a true treatment, it will need to be able to break down the gluten in the stomach before it has a chance to enter the intestines where it causes so much damage. In addition to intestinal damage, celiac disease is associated with a wide variety of health problems including vitamin and mineral deficiencies (which lead to other health problems, like osteoporosis and anemia) lactose intolerance, infertility, nervous-system disorders, a failure to thrive in children and other complications. In rare cases, celiac disease can lead to small intestinal lymphomas. The disease is usually first diagnosed with a blood test known as Tissue Transglutaminase Antibodies, which tests positive in about 98 percent of people with celiac disease who are eating gluten. Next is an endoscopy to biopsy the small intestine â to look for those nubby villi â in order to confirm the diagnosis. Classified as an autoimmune disorder, celiac disease is considered to be vastly underdiagnosed, meaning the majority of people who have it probably donât know they have it. Studies estimate that the disease affects about 1 percent of the population worldwide. âItâs somewhat ingrained in the medical community that itâs not a disease of adults or older populations. That itâs more a pediatric disease,â said Tejaswi. âBut more and more we realize it can manifest in adulthood. About 25 percent of patients with celiac disease are diagnosed after the age of 60.â There is a strong genetic component to celiac disease, but the disease is not as simple as cause and effect. âEveryone who has celiac disease has these biomarkers, but even if you have the biomarker you donât necessarily have celiac disease,â said Siegel. âOr to put it another way, just because you have DQ2 and DQ8 doesnât mean you have celiac.â

âBerber carpet vs. shag.â For people with celiac disease, an inflammatory reaction in response to gluten causes the shortening of villi in the small intestines, which affects the absorption of nutrients. A microscopic view shows the blunted villi of a celiac patient. (Credit: Wikipedia) 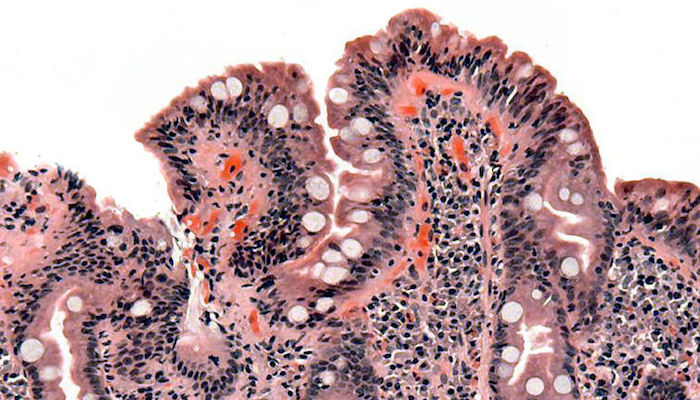 Pam Ronald Featured on 'Face to Face' with Chancellor May

Highly-Cited Faculty at the Genome Center 2021